Office fans reading this aren't going to like me today.

I'm going to start with the first deleted scene from last night's episode "Casual Friday". I cannot believe it's come down to this, but Jim and Pam are becoming so impossibly annoying and over the top cute that I want to flip the channel to whatever ABC is airing.

It was my impression that they were a very realistic couple. Once united in romance, they would share the ups and downs of couple-dom. Yet, instead of everyday situations that could produce a juicy low key argument real couples have, we are treated to a Hallmark card. Are they so perfect that nary one problem arises between them? I'm not talking about Pam's parent divorcing and Jim has to be there to hug her. I'm not talking about Pam failing an art class and crying into the phone as Jim's soul dies thinking she's going to have to stay in NYC. I'm talking about a moment where Jim doesn't agree with Pam about a new door hinge for their house, or speaks up to her about how he feels about losing his clients to Michael. But no. We barely even see them interact, but when they do, it's a love cloud of fluffiness. Now that Pam is a sales person sitting in the main area of the bullpen, I actually feel for Dwight Schrute, for he now has to endure this lovey dovey-ness.

That said, "Casual Friday" was...interesting. It's causing a stir among fan boards where people are debating the business ethics of Michael going off to start his own company, luring DM's clients, only to come back with a new sales team that has all those clients - virtually taking the money out of the pockets of the original salespeople who cultivated them. I have to tell ya, having been in sales myself, that sucks. That sucks big time, no matter whose side you're on.

I can expect the petulance in Michael to come out upon his return, since he felt spurned by a staff who didn't want to take a chance on him by leaving their only form of income to follow him out the door. That's Michael. He has the emotional capacity of a child. I would expect Ryan to be a smug bastard because smug bastard runs through his veins (I admit it - I love having him back), but Pam? In coddling and supporting Michael, she's now becoming Michael. Look, she had every right to feel pride in what she thought was a major accomplishment of getting a pool of clients of her own, but to come back to DM and think it's fair not to give back those client to those who harvested those relationships, just plain sucks. It's a good thing they all came to their senses, because this episode was getting aggravating. I felt for these characters because I could relate to them, but when they side against common sense, then I'm out.

Although Phyllis was more bitchy than usual, and could have toned down the venom a bit, she had every right to be angry and lash out. Telling Michael that he always thought they were a family, and he wasn't treating them as such, was a nice kick in the ass. Pam getting the job was predictable because nothing will ever go wrong with Pam ever again. Jim stays out of it. And is it true? I'm actually supporting Dwight in all this? He's always over the top, but maybe in this case, it was understandable considering what he lost.

The one person I will adore until this show ends is Kevin. Kevin and his vat of chilli. Oh, how I wanted to hug him. Poor Kev lovingly made that delicious tank of stew, only to have it fall on the ground. We've been there, Kev. Been there. 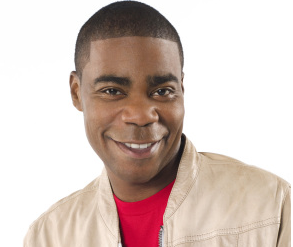 What a great way to bring down my blood pressure after a trying episode of The Office than a funny, joyful episode of 30 Rock. This show really never disappoints because the characters are so quirky and somewhat surreal. There is no pressure or emotional attachment that makes you want to tear your hair out when they go off the rails. Because they always go off the rails. You just sit back and laugh you buttocks off because it's just hilarious.

How I adore Tracy Morgan-Jordan. He shined like that crazy diamond he is while proving to Lemon that he doesn't have to be coddled - that yes, Santa, there is a Tracy who can show up on time, read his lines, hit his cues and complete a total sentence, all while wearing a Cosby type sweater and smart glasses. Liz had to prove shes wasn't so special by hanging with the boys and getting drenched while changing a water bottle, usually handled by the big burly guys on set.

Elaine Stritch looked fantastic last night as she settled Jackie-kins big questions about his father who left and came back so many times Colleen lost count. Her proclamation of love for number one boy was so sweet, so warm that it proves that maybe this show has more heart than I give it credit for. But the cliff hanger remains...is Jack father really his father?

Jenna's pet Gibbon was painfully cute. Watching him try to kill her was even better. I love Jenna, but hell, that physical comedy made my night. Jane Krakowski needs an Emmy.

Parks and Recreation: Boys Club
What was that? Did I actually laugh at something here? Yes. I did. Last night's episode, where Leslie gets in trouble for using a gift basket to party with the office "Boys Club", actually made me chuckle. It was light laughter, almost subconcious, but what do you know? I...laughed.

See? I'm still giving this show a chance.
Posted by TVBlogster at 6:12 AM

Email ThisBlogThis!Share to TwitterShare to FacebookShare to Pinterest
Labels: 30 Rock, The Office