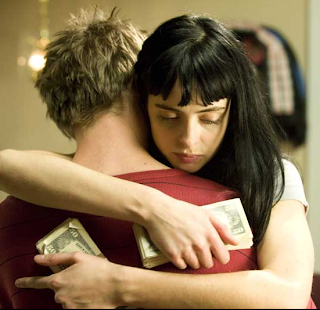 Perhaps I'm getting as hardened as Walter White. Indeed, it was horrid to watch Jane die. However, in the context of this story, it had to be done. She welcomed Jesse to heroine, joining their use like it was a grand romantic bond. This was hard to take. Claiming a stake in the money stash she had no right to claim was as infuriating to me, the viewer, as it was to Walt. Her death keeps Walt's dark secret alive. Her death sets Jesse free.

Major props to Krysten Ritter, whose beauty and sensitivity to the role made you love Jane, hate Jane, and mourn Jane. Aaron Paul's portrayal of Jesse continues to floor me. He really deserves an Emmy. Seriously.

Walter's paternal love for Jesse adds more texture to their multi-layered relationship. It's beautiful and sad, tragic and exasperating. Walter's own son doesn't even share this type of bond. Walter Jr. and Walt are de-attached beings, existing in a family tree that's rotten to the core. Yet, Jesse is part of his dark secret life, the personal "self" he perpetuates with mind games and driving ambition, infused with near death instances and violent scenes, dipping their toes in murder, facing death in Tuco's face. What cultivated from this web of deceit was empathy for Jesse, an uncle-like care for his welfare that went beyond business. What do you make of that? It's a bittersweet discovery.

And baby Holly was finally born. I'll wager a guess that Ted Beneke will be taking care of that child by the time this show ends. That is - if he stays out of white crime jail or avoids death.

Next week is the season finale, and somebody else is going to die. Cannot wait.
Posted by TVBlogster at 6:43 AM