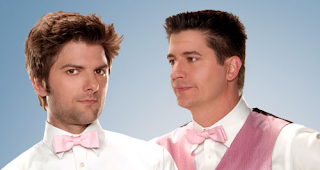 Due to the weekend haze that came upon me this past Memorial Day, the season finale of Party Down temporarily washed clean from my memory like the Naval whites of our NYC Fleet Week visitors. But it happened, and I watched. And I loved.

It's easy to see why the new Starz comedy, featuring a bunch of Hollywood dreamers surviving on minimum wage at the L.A. catering firm "Party Down", has become the coolest show to watch. The humor is not only sharp, but the cast is phenomenal. It enjoys the cool, effortless comedic timing of Jane Lynch, who due to her commitment with Fox to co-star in the new series Glee, was replaced late season by the flighty and fabulous Jennifer Coolidge. Adam Scott, with his slack eyed sexiness, maintains a vibe of hopelessness as Henry Pollard, the former actor who gives up on his dreams while dragging his past glory as a beer pitchman on his back like a cross. He leans on Casey Klein (played by cute Lizzy Caplan) with the hope that love will keep him going, but as a down on her luck comedian, her heart is focused on career success. Ryan Hansen as Kyle Bradway enlivens the archetype California blond guy bound to become famous in some surfer slacker reality show, and Martin Starr is perfect as the dry, sci-fi geek screenwriter hopeful Roman Debeers, who will most likely be bumming it out in a studio writers room, brainstorming sketches or breaking stories for an A-list comedic film star one day.

But I save my person favorite for last. Ken Marino as Ron Donald is a sweet, yet complicated character - in the same vein as Michael Scott. Once a hard living party animal nerd, we find Ron in a state of stoic redemption, passionately striving to be the consummate manager. He endeavors to please, but often fails. Ron stands apart from the rest of the Party Down staff. For them, the job is a time killer for a paycheck. They dwell in a lackluster haze, out doing each other in personal dramas and ambition, orbiting around Ron in a state of de-attachment. Yet, Party Down is Ron's life, his career. After all, there's that SoupR Restaurant franchise he wants to own one day. Marino harnesses sympathy much like Carell. It lives in his pores. He can make you laugh while laying in his own vomit, or crying in a closet, but you know there is something profound there.

No word on season two just yet, but it's due to happen. Co-creators/writers Rob Thomas and John Enbom (along with Paul Rudd and others) didn't anticipate how successful the show would be, so the cast ensemble needs to be confirmed, but all in good time.

Here's a snippet from Party Down, season one: