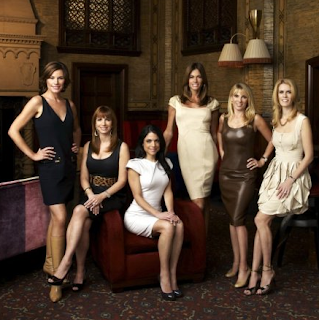 The season finale of The Housewives of New York City aired last night with a charity event, various fights and hot tempers turned down to bitchy coolness. I've watched this series from an arm's distance. I admit it. The escapades of these Gucci/Laboutin clad females, these well tucked, coiffed, manni-peddi'ed, Pinot Grigio soused women who hit the lottery of marriage, fascinate me. I can barely get their names straight. I call Jill "Bangs with an Accent". Romona is "Shit Stirrer"or "The Bulging Eye Lady". I like Bethenny, and can recall her name over the others, but she can get on my nerves, and earns the name "Yappy Yap Yap". LuAnn, "The Countess" is indeed "The Countess" because the title alone is so exotic and odd in this country, it conjures romantic notions of British drawing rooms. Kelly is simply "The Model" and Alex is, well, she's just plain odd, and her husband Simon is...her husband is... Whatever he is- he makes me queasy.

As mentioned, I do like Bethenny Frankel. She's far from perfect. Compared to the others, that might not be saying much. She's not even a housewife. Beth is this Carrie Bradshaw-like social butterfly-career woman looking for a boyfriend. As much as I like Bethenny, her job puzzles me. For a professional chef, whenever we see her cook, like we did last night, she almost seems out of her element. In fact, she looks like me in the kitchen, carefully pulling together ingredients like they're foreign matter, chopping food slowly with an unpracticed careful cadence all while staying balanced on high heels. Despite all this, Bethenny does at first appear to be the only semi-sane one in the bunch- until you watch her long enough. She gets into fights. She never leaves arguments alone, reveling in confrontation, making sure she gets things off her chest. The fact that "The Model" Kelly doesn't think highly of her is not something we need to have placed on the table and hashed out a dozen times. She doesn't like you. You don't like her. Next.

Ramona likes to be snarky and basically horrible. In the ladies charity meeting, she had to pull the "de classe" card when Jill wanted to promote a company at the auction. This, after once famously telling The Countess, who is the ultimate snob, that her husband is old, which he is, but she didn't need to be said - in front of his kid. Money doesn't buy you class. In fact, it buys you lots of booze. Ramona's consumption of wine keeps the vineyards of Italy and California running. She's usually (or at least appears) half in the bag by early afternoon. Also, her eyeballs look like they will soon leave her head.

Jill has the New York yenta accent and the bangs to carry them. Despite all her spoils, she tends to make sense most of the time. When Beth laid into her about taking down the Frangelico signs that helped pay for the booze at Jill's charity event, Jill was right in telling her to stop it. Yes, it's always all about Jill, but fair is fair - it was her event, and she didn't need the mishigas.

Alex is a strange bird. Strange. She's so blond, so skinny and so nervy, it's like you can't really see her even if you're looking straight at her. She and her husband Simon are social climbers who have to convince their Manhattan dwelling friends that living in Brooklyn is actually classy. Their brownstone construction is now complete, and as Ms. Frankel promptly put it, looks like a bordello. With red walls and and black trim, it's like a a whorehouse madam puked up all her ideas all over their walls.

Alex's husband Simon: Why he likes to dress up with a Eurotrash sense of style and claim he's being edgy is beyond me. News Flash: Honey, you aren't being "different", you're being a middle age guy with no personal style - trying too hard to be different. His leather clad tight suit was pretty bad. I mean, I can't even say anything funny about it. You almost feel sorry for the guy. There's nothing more sorry than a nerdy, geeky 40-something father of two try to wear clothes he thinks makes him cool, yet, he appears like an ass who'll be powdering his chaffed thighs after peeling off that catastrophe before bedtime. He's amateur. You have to earn that leather.

The only ones who would look good stretching out those pelts are these two cuties.... 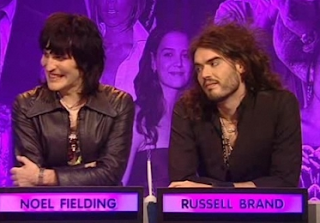 ...and even they wouldn't be caught dead in his wardrobe.

Also, the sight of him gyrating on the dance floor with the awkward Alex was retch worthy. Does he not have a clue?

So, the season is done. Next on tap is The Housewives of New Jersey, whose ratings did well when previewed recently. I'm on the fence about this one. Didn't we see enough of those housewives on The Sopranos?
Posted by TVBlogster at 6:49 AM

Email ThisBlogThis!Share to TwitterShare to FacebookShare to Pinterest
Labels: Housewives