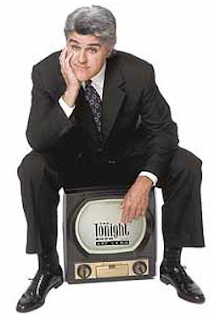 I like you, I really do. You're affable, decent, entertaining. There is not a nasty bone in your body. But I hate to say this. I hardly watched your Tonight Show. When it came to the 11:35pm timeslot, I was a Letterman girl. Yet, for pre-bedtime viewing, I've even forsaken my old late night buddy for a dose of Stephen Colbert before I turn off the light and roll over.

Now don't take this the wrong way, but I adored Johnny, and wanted Dave to succeed him. As much as I admire you, I never took you seriously as the host of the longest running night time talkshow. For decades it was led by a list of television legends. Steve Allen, Jack Parr, Johnny Carson - they broke the concrete for the late night talk show medium, re-definining it with each decade, adding edginess, intelligence, sophistication, controversy and silliness with each turn of the commercial break, each guest spot, each sketch. They were hip, smooth, smokey and sly with a good boy, middle America sense of the everyman.

Not that you don't share the same, it's just that your jokes relied on the yuk-yuk side of humor. And, well, comedy is subjective. Your monologues meant well. They appealed to a vast viewership, but I found them average. Your need to please was all too palpable. Your style more loud than stylish. What Johnny made smooth, you made digestible for mass consumption. What Johnny made hip, you transitioned into a colorful Hollywood circus. Careers were born on his show. I'm not really sure whose career was made on yours. The strange thing is - Hugh Grant and his starring role as embarrassed actor - sort of made you. When he came on to answer to all the talk about soliciting a prostitute, your ratings soared beyond Dave's and never looked back.

I've had some brushes with Jay-ness. I ran into you at Universal Studios while doing a stint for "Jay Walking". It was a nice highlight in a featureless trip to Los Angeles. Back in the old Late Night Letterman days, I once rode a west side elevator with you at 30 Rock. You had a box of props in your hands. Riding your way up to the 14th floor, preparing to guest on his show, I could sense the ideas clicking in your head. Those were good days - when you two were in cahoots. Competition and ambition can change people, I guess.

Your last show airs tonight. It doesn't feel the same as when Johnny bowed out. It just feels just what it is - you're moving from 11:35pm to 10:00pm now. It's not that I can't wait for you to leave, it's just that I miss Conan something fierce, and the sooner he takes over, the happier I'll be. Nothing personal. Friends?

Still, congrats are in order for seventeen years of The Tonight Show. Good Luck with 10pm!

Conan will be appearing tonight on Jay's final Tonight Show. He takes over as host on Monday, June 1st.
Let the Conan era commence... 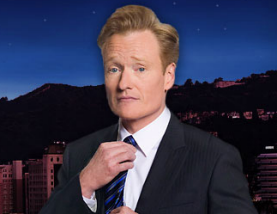 Posted by TVBlogster at 7:54 AM

Email ThisBlogThis!Share to TwitterShare to FacebookShare to Pinterest
Labels: The Tonight Show