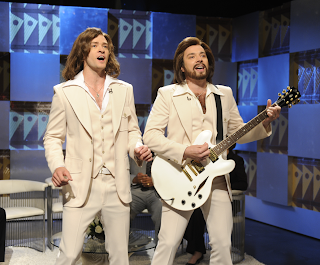 Happy Mother's Day to all! Here's a rare Sunday afternoon round up after an awesome SNL last night.

Justin Timberlake has become part of the pantheon of favorite SNL hosts. Alongside Steve Martin, Alec Baldwin and Tom Hanks, he is one of those performers who know how to do this show, easing into the adrenaline of live television

Timberlake returned to SNL last night with an array of hilarious sketches that kept me glued to the show long after Weekend Update. He even joined Ciara for the musical number.

Some highlights: The "Dick in a Box" guys came by with a Mother's Day edition called "Motherlover" that will surely spread virally around the internet starting today. Awesome cameos by the gorgeous Susan Sarandon and the fabulous Patricia Clarkson.


Timberlake on the streets singing smack to his competition:


Personal favorite of the night: Timberlake creates the "Classic" Peg, friend to that weird lady from "Teeerget". Brilliant. Do I smell a new recurring character?

And of course...Jimmy Fallon drops by for some awesomeness.

Season finale next week with host Will Farrell and musical guest Green Day.


Photo courtesy of NBC Universal
Posted by TVBlogster at 9:29 AM