How I Met Your Mother Season Finale 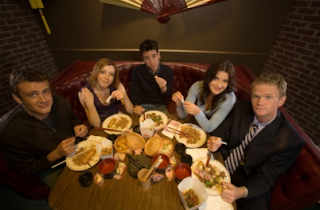 Here's my shout out to the wonderful season finale of How I Met Your Mother last night. It was an episode of leaps of faith that defied the fear of plunging into the abyss. Ted's story with the surprise party, his dedication to a lame career boosting project, and the goal fight, really hit home for me. Sometimes you are so stuck on an old goal, an old vision, you begin to hate everything in your life. You have to change something, make that jump despite being frightened of the consequences, frightened of leaving your comfort zone, and frightened of abandoning a dream you're used to chasing, but had grown out of long ago. Thanks to Marshall's sudden decision to make his own jump across the precipice, and Lily's sage wisdom (mixed with eye rolls of snark), the message of this episode really put some thought in my mind. Seriously. This show. A sitcom I watch only occasionally, really made me think.

Barney and Robin's funny "Mosby" tango was also a great plunge into fearful territory, admitting their love, yet not admitting it. How I adore Neil Patrick Harris and his Barney ways.

I guess we are only seeing the beginning of how everyone's mother's were met. More to come next season.
Posted by TVBlogster at 10:08 AM

Email ThisBlogThis!Share to TwitterShare to FacebookShare to Pinterest
Labels: CBS, How I Met Your Mother