A Night of Finales

Summer beckons. My beach bag, filled with suntan lotion, beach towel and pool pass has waited in the back of my closet as fall turned to brittle winter. But hello to summer means goodbye to some television favorites for the season. Tonight is season finale night for NBC's comedy Thursday lineup (at least the part I watch). 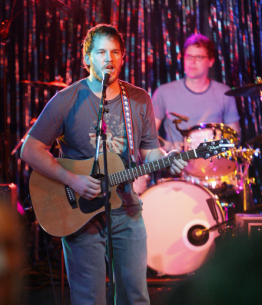 The casts are off Andy's legs. What better way to test them out then to perform at a gig. Leslie tries to balance out her personal and professional life while everyone on her staff heads out to watch Ann's boyfriend shred the guitar. 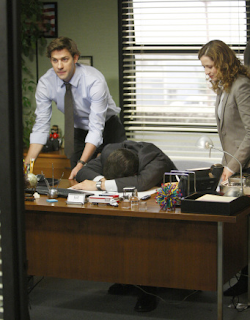 The Office: Company Picnic
Airs tonight on NBC at 9:00pm edt/8:00pm cdt
Is the photo above a spoiler? Story: It's a warm and muggy day in Scranton. Thunder rumbles in the distance as fear quakes across the corporate park. Jim and Pam, driven to madness by Michael's neediness, poisons his cup of morning milk and sugar. He gasps his last breath. They frantically try to cover up clues to the murder. They cackle. He is dead. The fearsome annoying master is dead.

Not in this episode. It's just Michael dieing inside after finding out Holly and AJ will be at the company shindig entitled "Company Picnic". There will be twists of ankles and Michael trying to win back the affection of Holly who has moved on, while Michael grits his teeth and calls AJ fattie to cut him, even though he's totally rocking. 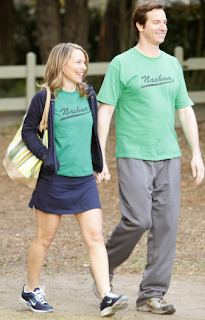 Even if the Nashua couple goes down in flames, I'm still shipping AJ and Ms. Flax. They are so fricking cute. It's like a Jim and Pam redux - Nashua version. Also, it's nice to see Rob Huebel and Amy Ryan back, with the hope of seeing them again next season. 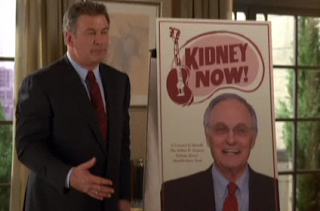 When we last left Jack, his newly discovered biological father Milton dropped the kidney bomb: he needed one. Oh joy! He has a son with a spare kidney! The look on Jack's face could crush a truck. In tonight's episode, Jack tries to help his new dad without going under the knife by rounding up a bevvy of celebs for a benefit show to get Milton a new organ. Sheryl Crow, Elvis Costello, Mary J. Blige, Clay Aitken are summoned under duress to perform in the feel good show of the year.

Meanwhile, now that Liz is enjoying the fame of the new "deal breaker" catch phrase, Jenna forces her to go on a trashy talk show to promote it. Tracy is invited by his high school to speak at graduation, but Kenneth has to help him overcome his embarrassing school memories.

It's been a real treat to see Alan Alda as Jack's dad. I'm holding out hope we have a Colleen sighting tonight just to see Elaine Stritch. A finale without Elaine is like, as Black Adder once said to Queenie, "... a broken pencil. Pointless".
So goodbye old season, and hello summer time. These shows will return when the calendar flips the page to September.
Posted by TVBlogster at 6:27 AM