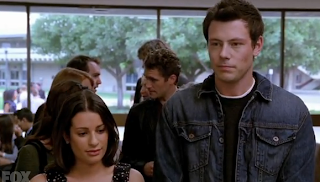 Think Friday Day Nights meets Disney's High School Musical, and you have Glee, Fox's new dramedy that premiered last night on Fox. Strange brew since it's a combo of two types of shows that are polar opposites in story, character and theme - but the usual teenage angst flows. It follows the trials, tribulation and acne cream world of a high school Glee Club intent on making waves among the Glee Clubs of other schools that compete in national competition. Although filled with some heart, it carries the usual archetypes of school nerds versus the mean jock conceit, the gay boy and the wheelchair bound geek, but there is a satirical edge, with underdog yearnings that no doubt will be rewarded with glory in a blaze of sparkling song and dance numbers.

The group of young singers plucked from teenage land are remarkably accomplished for adolescents in one school alone. However, Rachel, played by Lea Michele, is a show stopper, sporting amazing vocal chops and major ambition, lamenting to her teacher and Glee Club coach Mr. Schuester (Matthew Morris) that she wanted to be "Somebody" before her school days are over. I just kept thinking, honey - go on some auditions, who cares about these pimply, narcisistic idiots? Most of those cheerleaders are going to be disgruntled Botox'd injected divorcees hitting on their sons' friends at their graduation parties. You'll be on Broadway. Give it time.

Nevertheless, there is some sweetness laced within the usual predictable story lines. Will Schuester is married to his high school sweetheart. The wifey is ambitious in her mid-range sales person job at a linen store. She's deliberately everything that's wrong. Overly sweet. She's pert. Cloying. Loves to flash the plastic and believes she deserves to shop 'til she drops. Now she's pregnant - which makes Will question his job choice since finances aren't so good when your wife buys three wood carved toilet cleaners from Pottery Barn and keeps a "Christmas Closet" in her house filled with newly purchased crap. You know they're done. Meanwhile, Emma Pillsbury (Jayma Mays), fellow teacher and germ fetishist has a major crush on Will, has befriended him, and is showing signs of being the better girl by saying all the right things. I think you get the picture.

Still, very sweet show. It's for the Disney and American Idol lover in you.

Last night's Glee pilot was a one time peek. It won't be returning to Fox's schedule until Fall.
Posted by TVBlogster at 7:08 AM

Email ThisBlogThis!Share to TwitterShare to FacebookShare to Pinterest
Labels: Glee